On the outskirts of Ponda Goa, one can see the historic Safa Masjid or known otherwise as to the Shifa Shahourie Masjid. This historic structure is a historian’s delight. The Safa Masjid Goa is a proud representative of medieval Goa’s history and culture.

Thankfully the modern life carried out in Ponda has not yet affected the serene, classy, and elegant periodic look of this magnificent mosque. 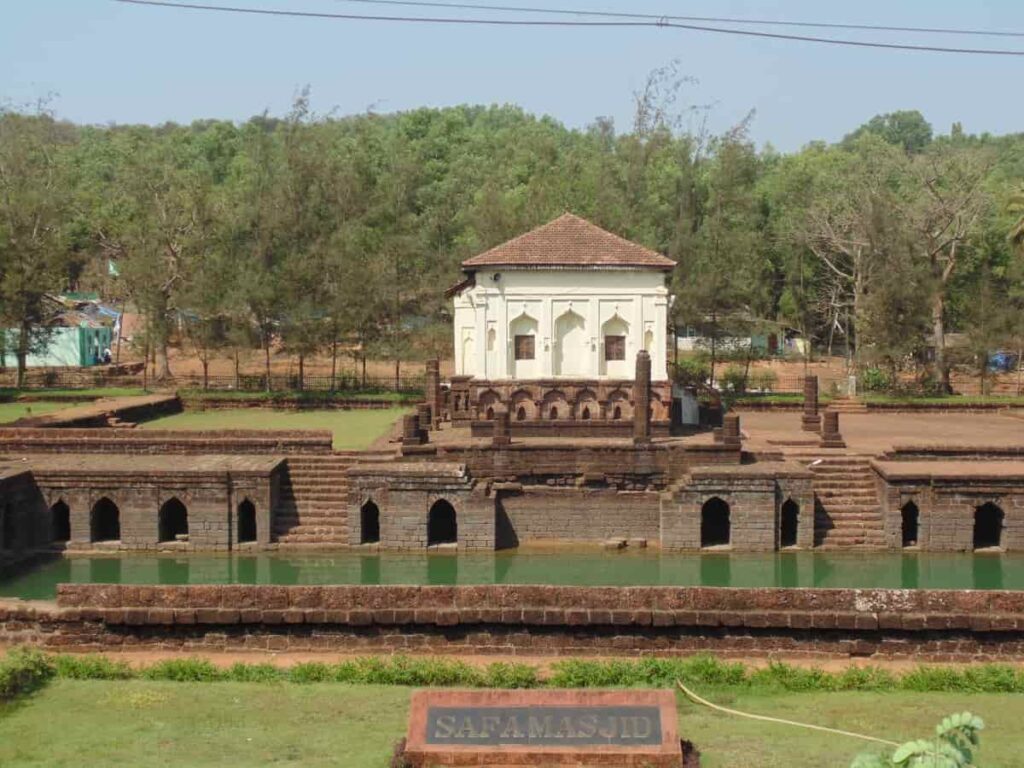 It has withstood the ravages of time attracting a large number of Muslim devotees, historians, tourists, both domestic and foreign. It has been noted as an important heritage monument of Goa and India.

The name of this Mosque (Masjid) comes from the Arabic word ‘Safa’, meaning clean, chaste, and pure. The name suits this monumental structure as it is nothing less than pure and clean. It is meant for the chaste, clean, and for the pure at the hearted soul.

From 1489-90 onwards, Goa was under the control of the Adilshahi rulers of the Bijapur Kingdom. Yusuf Adil Khan was the Turkish founder of this kingdom who ruled in Goa from the year 1489 to 1510. It was in 1510 that the Portuguese army led by “Afonso de Albuquerque” conquered Goa from the Adil Shahi rulers of Goa.

In the 16th century, the Portuguese conquered the Tiswadi, Bardez, and the Salcete only from the Adilshahi rulers, but Ponda and other parts of Goa continued to be under the Adilshahi dynasty. Ismail Adil Shah was succeeded by his son Ibrahim Adilshahi I, who ruled from 1534-1557. The authenticity and the factuality are that it was “Sultan Ali Adilshah I” who built the Safa Masjid of Ponda in 1560.

The most interesting part of the Safa Masjid is the huge tank with 44 ‘hammams’ (hot air baths) dotting its four interior sides in the typically Islamic Mehrab style arches. The tank has a flight of steps done up in the typically Hindu bathing ‘ghats’ style. This green rectangular tank holds a mirror to the small mosque, which stands elegantly facing it. The tank and the mosque is done up in the laterite stone masonry.

The mosque originally was built up of the exposed laterite which was dotted with a number of Mehrab style arch and niches for people to pray accompanied with the original laterite pilaster.

You can still see the remains of the mehrab arches on all the four sides of the mosque where the top half of the mosque is plastered with a cream colour with chhajja design, Persian style Mehrub double archs, pilaster with brackets.

On the top half of the mosque, the mihrab double arches are crowned with a beautiful lotus bud motif, which adds to the serene beauty of this simple mosque. Here the mehrab style windows are square.

The roof of this elegant mosque is tiled, and on the ends, you will find some ruined standing laterite pillars.

The mosque and the tank were formally surrounded by an extensive garden with many fountains. The sight of the mosque from the main Ponda-Panaji road is extremely pleasant to the eyes.

How to reach Safa Masjid Goa

Safa Masjid is located just outside the city of Ponda just next to the new bus Stand and can be reached by taking a bus from Panaji, Margao, Sanvordem, Shiroda, or any of the nearby places.

One can easily reach here by walking from the bus stand at Ponda. The place is well connected and is reachable from all major towns and cities in Goa.

Goa is known for a lot of its historical monuments, especially its churches done by the Portuguese rulers in Goa. There are a lot of historical temples as well, like the Mangeshi Temple, but the Safa Masjid (mosque) is one of a kind and with its historical background is truly a gem.