The remote yet loved Mahadev Temple Goa is a temple constructed in the 12th century. It is a temple built as a dedication toward the Hindu Lord Shiva located in Tambdi Surla, Goa.

It remains a place for worship even today. The Mahadev Temple is the temple remaining of the Kadamba dynastic period which has miraculously survived the violence by the Muslim and Portuguese invaders from destroying the temple.

The structure of the temple is unique and has been constructed with keeping the Kadamba Style in mind. It was built in the 12th century using basalt rock which has to be taken across the terrain over the Deccan plateau. It was carved out by skilled craftsmen.

Due to its remote and hidden location in the forest below the Western Ghats, the temple was able to be protected from all sorts of battles and invaders looking to cause destruction.

The temple has a statue or symbol of Lord Shiva placed inside the inner walls of its building.

The Mahadev temple is built from the use of materials such as garbhagriha as well as antarala. The pillared region of the Nandi mandapa is made of basalt rock. These pillars have beautiful carvings of elephants and chains. There is also a ceiling made of stone and decorated with precision with carved Ashtoken lotus flowers.

Facing the east side, the temple welcomes the fresh rays of sunlight in the wee hours of the morning giving a sense of freshness to its interior.

There is also a symbol to show the Kadamba Kingdom represented by an elephant trampling a horse which is carved below the columns.

How to Reach Mahadev Temple Goa

The location of the Mahadev temple is set beside a tiny village known as Tambdi Surla. This village is located around 13 km away from another village known as ‘Bolcornem’ which is in the northern area where the Mahaveer Sanctuary is. The Mollem National Park in the village of Molem is also closely located to the temple.

The Ragado River flows by the temple and is a place for bathing by the locals for ritual purposes.

The temple is 65 km away from the capital of Goa – Panaji. It can be reached via the main road from a town called Valpoi. The temple is below a ghat perfectly connecting Goa to the state of Karnataka

Bhagwan Mahavir Wildlife Sanctuary is located near the village of Mollem. It is about 54 km from Panjim and 52km from Margao. Sanctuary is 14 km from Mahadev Temple Goa

Having lush greenery on all sides the temple remains cool throughout, however, experts say that the best time to visit it is from September until the end of February.

The temple is located in the midst of beautiful flora and sona of vegetation has a beautiful surrounding to it.

It’s a place that people come from all over every year in the hundred to visit this peaceful place. However, it is still an unknown designation for many!

So be a part of the lucky ones and go and see for yourself this wonder of a spot! 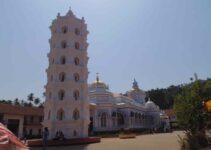